You are here: Home / Global State of Survival & Preparedness Report 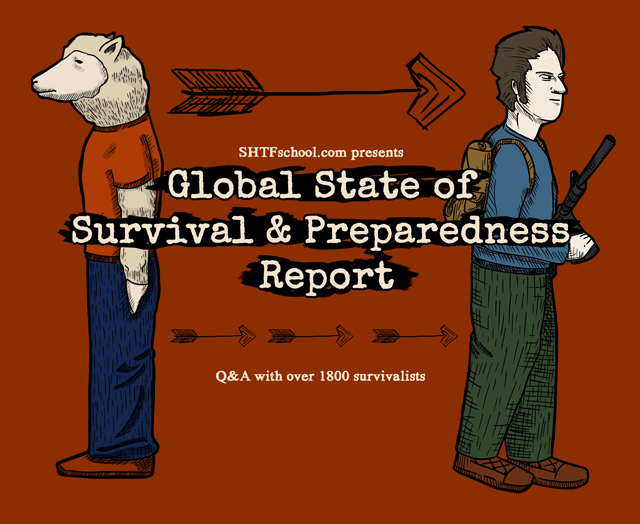 Over 1800 people completed our survival survey in the last two weeks. The feedback has been great and this is the first part of three in which we share the survey results with you. We started the survey with a “classic” question.

How long have you been preparing / into survival?

Many people seemed to have gotten into survial / preparedness because of the bank crisis and economic problems in recent years. The surge of survival related TV shows and movies will have also contributed to this. The Google Trends also show a rise in interest in the topic of “survival”. Of course the Google trends also include all those looking for the latest Bear Grylls tv shows to see him squeezing some water out of a pile of poo.

Please describe in a few sentences what scenario you are preparing for and what events might trigger it.

For open questions like this we have used a computer script that analyzes the most common words and creates a word map in which more often used words appear bigger.

Most people prepare for an economic collapse. One of the most often cited reasons for this collapse was the political situation in the US, the Euro debt crisis (Greece default was named a couple of times) and the greedy corporate world (bankers / multinational companies).

Here is one response that is very typical for what many people wrote:

One thing that is not so obvious from the word map is that most people also simply prepare for every possible scenario. One survey respondent wrote:

I am preparing for anything and everything. A weather scenario that might leave me stranded. A riot situation that would require me to leave the city for either a short or long period of time. A economic collapse that would necessitate starting over at a retreat.

Two more great responses that sum this attitude up:

Any situation that falls outside of society’s norm. Basically, I want to be prepared for when my days become less than normal, regardless of the situation.

Not any one particular scenario. preparedness is a way of life for me, not a reaction to any one perceived threat.

Some people also prepare because they live in areas that are often hit by natural disasters. Earthquakes and hurricanes were mentioned most often but more about natural disasters a bit later on in the survey.

We live in a hurricane area, and if bridges were damaged, we could have months of no food or fresh water. Duing such a situation, the rule of law could be gone.

When it came to disasters quite often the possibility of an earthquake on the New Madrid fault line was mentioned as well.

Primarily, I’m preparing for a major earthquake on the New Madrid fault line, expecting at least six months without any outside support, no water/electric/sewer and few passable roads.

EMP (Electromagnetic Pulse) attacks by other countries or because of solar flares are on many people’s mind as well.

Loss of technology due to collaps of power grid. This collapse can occur from pandemic, emp terrorist attack or emp from solar flare.

Economic collapse is the primary event we are preparing for. Also possibly an EMP. But the continued tightening hand of government is concerning, and the less reliance we place on the digital world, the safer we feel as a family.

Civil unrest was mentioned often but not many prepare for a real war. One respondent described a civil war scenario he or she prepares for like this:

Civil War II, Caused by the split of America along three major racial lines, whites to the north, mexican in the southwest, blacks in the deep south; caused by engineered financial distress; caused by political instability in the land. In short, the collapse of the rule of law in the land.

Only a few people prepare for the rise of the beast (great tribulation), zombie apocalypse or an alien invasion. Only a few people named the “New World Order” as one of the reasons, but the political stability (or lack thereof) was mentioned often.

Some other interesting responses:

Scenario? TEOTWAWKI, breakdown of ‘services’ because ‘the trucks don’t run’. Here, we are totally dependent upon resupply of nearly everything, and it all comes by truck.

Being prepared is more modeled from the Boy Scout motto “be prepared” – I’m not overly concerned with black swan sorts of events, but in being prepared for severe weather or economic hardship, we also can plan for circumstances more dire but imposing similar challenges.

Do you currently prepare for a long term survival scenario? (5 years + / sustainable living)

Why don’t you prepare for a long term survival scenario?

People could also name an individual reason why they are not preparing for long term survival. 118 people did. Here are some representative answers.

No time, so far, still in the basics….

Several people also did not think it makes sense to prepare for long term crisis either because we wouldn’t survive anyway or because they do not believe a long term survival scenario is likely to happen.

Do not believe we can survive without technology for five years.

If it is that long we will be killing eachother anyway

I think things will be resolved sooner than that and can only plan for about 6 months of food, etc. easily.

As indicated in the charts money is a big issue and for several people space as well.

Would like to but not enough money or space.

I’m a policeman, I won’t live that long.

We hope you do!

How long would your current food supply last? (Just the food you store)

How do you buy your preparations?

Where do you buy your preparations?

What made you start to get into survival?

(Mouse over the bars for full description)

» Continue to Part 2 of the Survival Report