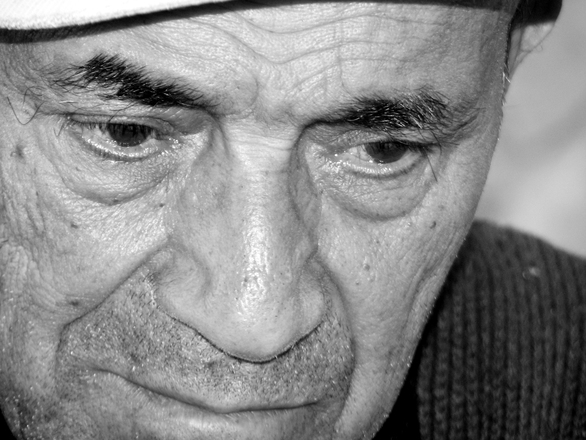 My great uncle was a drinking man, he would drink heavily from the moment when he woke up until the moment he went to bed, but I do not remember ever seeing him stumbling, walking funny or having problems with his speech.

When he was at home his favorite spot was on the couch in the corner of the room, just next to the wood stove which was running always except on really hot days.

He drank from very small glasses (shot glasses), bottle was never visible (he kept bottle behind the couch) on the table there was silver box for cigarettes, with tobacco and papers for cigarette rolling inside, and his shot glass.

Table was old type table with a glass plate on top of it, and under that glass he kept paper that says that government and state recognizes him as a member and organizer  of the early resistance movement against the German and Italian occupation (WW2).

Table, his cigarette box, his rakija and everything else in his room was off limits for us kids. He lived with my grand parents, he never married, no kids.

Actually now when I remember he himself was pretty much off limits for us kids, only person who ever had some influence over him was my grandmother-his sister, she was the only one who could tell him sometimes that he need to do something.

He was one tough and dangerous old dude, sitting in the room. Drinking and staring in the spot where the wall connects with ceiling.

Sometimes we kids sneak in the room, seeking for stories, or money from him, in return we would bring firewood from shed for his never-ending stove fire.

He would gave us money often from his big “veteran warrior” pension, stories were rare.

Often kids just sat there, talking something, he would occasionally say “uhm” or “ahm” and stare in empty.

He did not go out very much, except his regular chess meetings in the local community hall.

It  was something like community hall, war veteran organization and heavy drinking joint place in one.

People call it “half leg” because several handicapped folks who were there all the time.

And I was a kid who often went with him there, my grandmother often would tell me “go with him there and wait for him”, I guess she simply was worried for him.

Place was big hall with old tables with games like chess and checkers on them,  great uncle would sat down usually with same folks there, his old war comrades.

They would play chess, drink heavy booze and over the time they would usually forgot that I am even there.

In that time I was taught in the school that we are living in great socialistic and communistic society, where all people are equal, and that we got to that point through the heroic and noble fighting of working class in WW2.

War and fights were something noble, heroic and full of sacrifice. Our war vets were ‘clean’; they were people who sacrifice themselves for our motherland – for socialistic society.

I was taught like that, in my young mind all was black and white.

Over the time I realized that folks on that table together with my great uncle had a bit different picture about war and fighting and honor.

They talked about everything, but with heavy slang  and in what looked to me in that time in ‘codes’, and lot of “remember the Mora(mountain) and how we eat shoes”? and answer would be “yeah, fuck it, and how many bodies there”

Lot of that was not understandable for me, lot of head nodding,

One of those chess games stayed in my mind over several decades of the time since I heard it on that table:

Man who played chess with my great uncle had a pieces of shell in his body, I think it was not option to remove it so he grow old with that in his body, he had couple of pieces in his arm and fingers, and while he was thinking about his next chess move he would squeeze his fist and fingers and pieces of shell in his fingers were producing the sound like something is chewing inside his hand.

It was fascinating for me in that time.

What I understand from their story was this:

He and my great uncle were find themselves in some heavy fighting during the ww2 .

Their unit was carrying a lot of heavily wounded together with lot of civilians who were running from German forces.

Sudden attack of Germans made chaos and they together with couple of guys got separated from the unit.

They manage to break out from the encirclement, then they hide inside some cave for couple of days.

Days later they went out and wandered through woods trying to go to the safe territory.

And then they stumble members of their unit.

Actually a pile of it.

On one small clear place in the woods, there were hundreds of bodies in a big pile, and man with the “chewing” in his fist said he never before or later saw anything like that.

Soldiers and civilians were shot and put on big pile of bodies in the middle of nowhere, and he said that lot of them were heavily wounded but still alive actually, they were put there intentionally still alive, to suffer more before they die.

They found couple of woman tied to the trees… Dead.

They quickly move away from there, scared.

Later that night while they were resting they heard noises, quietly went to check and find out German soldier sitting down and bandaging wound on his leg, probably lost and separated from his unit.

That story terrified me to the bones, and I think I heard it only because they were pretty drunk and not even realized I was with them.

My great uncle died long time ago, he was heavy drinker too to the last breath.

On his funeral there were flags, and speech about honor and sacrifice, even his medals.

We never found his wartime machine gun “smajser” (mp 40) that he hid somewhere after the war never giving up to no one where it is, and as I am older I feel sorry I did not hear more about his experiences.

I am sure he cared a lot more for that machine gun than for speeches flags and medals.

He was scared often while he was in survival situation, he often did things that he did not like, he was not invincible, and he was ready for trouble again all the time.

He was a survivalist.

Point of this article is (just like lot of my article) is memory of something, in this case memory of my great uncle.

And there is one more point, for you more important:

Talk with old folks, with veterans, old or young, there is nothing like real life experience.

Be patient, best (or worst) stories are hardest to get, but it is precious knowledge.

It is better prepper investment to hear how (and what) tree bark to eat then to buy 10 MREs.

Many years after my great uncle experiences and events I experienced similar things, hunger, fightings, piles of bodies…

It is in human nature, things like this are happening and will happen again…