Blog
You are here: Home / Blog / Survival Psychology / Under The Bridge… 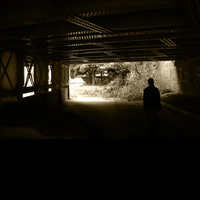 After maybe 6 months of horrible violence in the city, and life without enough food, water, electricity… after months of shelling, shooting, screaming and crying and simply after months of collecting wood for fire, plugging holes in my (what’s left of) roof, I “stumbled” upon on piece of normal life.

Through some contacts of mine, I managed to meet some guys from some kind of international force.

I need to mention here, in the war time there were all kind of strangers in the city, going in and out, through smugglers routes or with rare international convoys.

Some of them were UN forces, other were mercenaries, spies, or simply folks who want to earn money in bad and weird times.

Anyway, one evening I met these guys from Spain. Three big guys with even bigger smiles on their faces. Actually they stated they are from Spain, we did not care even if they came from the moon as long as they were of some use to us…

I was with two relatives, Spanish guys knew some English language and we knew some, and we wave with our hands a lot as an addition in communication.

They wanted to know whey they can find drugs and women, just like most of the outsiders wanted, together with what they called “war souvenirs”, weapons of war and stuff, interesting to them, or I guess exotic to them, flags with blood, knives, personalized weapons etc.

They had small assault rifles that they carried under their jackets, pretty fancy for us in that time, but what caught my attention was a small portable walkman on one of the guys belt and headphones around his neck.

I asked him ‘can I take that for a second and check?’ and he said sure.

I put headphones on my ears, started the machine and when music started I just had to sit down.

It was so powerful to me in that moment that I kinda lost it, I was like drugged.

I was sitting down and listened to the whole song, while Spanish guys looked at me, I guess to them I looked like some savage who never saw a walkman before.

They could not get it…

There I was, dirty and smelly, I could feel my toes in boots are sticky because water get in, I had weird rash on my neck, hand made cigarette smell like hell… but I sat, smiling like an idiot…

Music brought me back all that I have lost in last 6 months, it brought me peace of mind for a moment, memories of normal life, cafes and girls, the beach and fun.

Somehow I forgot all that in only 6 months time, and turned myself to surviving mode only, which was not bad, but in the same time, I lost part of me.

Few days before I met Spanish guys, one of my friends gets killed, he find himself in the open during sudden shelling.

He panicked, and gets frozen behind some telegraph pole, instead of jumping behind wall of ruined house few meters from that spot.

Piece of shell gets half of his head almost with surgical precision, upper half. Scary sight.

And that morning before we met Spanish guys we were (already) making fun out of his death, I said something like “can you believe that idiot tried to take cover behind a pole, like this is a cartoon”? and we laughed like idiots and drink.

I had no emotions about his death.

And in the same time I was angry on myself how one song can turn me into sissy.

Later I had the same feeling when I found whole bunch of books and brought them home to burn on the fire, and took one and started to read.

Point is that no matter how bad situation is, you just need to have some connection with “normal” otherwise you’ll simply turn yourself into animal.

It can be a book, it can be guitar and music, or simply chatting with friends – no matter how hard S. hit the fan.

Do not forget that you are human and you need to have and express emotions, or simply you may burn out.

Today I heard that song on the car radio, and it brings me back to those times and feelings, and I sat down and wrote this post without too much thinking.

It was the Red Hot Chilli Peppers “Under the bridge” song.

25 responses to “Under The Bridge…”

Going it Alone… Some Things To Consider. Some Thoughts On Food…
Scroll to top