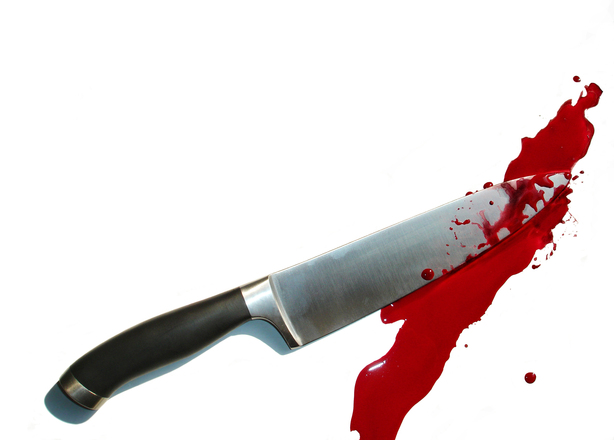 I wrote this article as an addition to the (excellent) guest article we recently had on on our blog. I have to say that it is written based on my experience, seeing and dealing with knife attacks and wounds, both during the SHTF and during my work in the medical field.

It is not written scientifically, or based on hard data, it is based on what I saw, or did… what I actually experienced.

Often we find, some same topics are viewed differently by different people, and it is perfectly OK to be like that, but when it is come to knife wounds and killing, in the end a wound is wound and blood is blood.

There is something primal (can we say even mythical?) in a knife (blade) and I guess it comes from the fact that it has been used as a killing tool for many centuries, and to be honest, for me it is most scary type of possible fight – to be forced to knife fight.

Having a knife in your hand and ‘pushing’ it into someone’s body is scary thought, it is very personal, on many levels.

As always, thanks to movie industry, people imagine a knife fight is like two guys doing a whole bunch of fancy moves. In reality it is mostly about who pulled their knife first and stick it in to the other guy. (Before other guy had a chance to pull his knife hopefully)

I know there are knife fighting experts out there, but I have never gone through some sort of experts training so I cannot say the full impact of this. But I know that if you are forced to do knife fighting with someone when SHTF and by the chance you have pistol with you, pull the gun and shoot the man twice… forget about ‘honor’ and ‘movies’.

Knife fighting (equal terms) means that you (almost for sure) going to get hurt, get at least a couple of cuts from your opponent. Remember even a small cut when SHTF can kill you.

Accepting the possibility people on the internet will call me an idiot, I must say that choosing your knife (for SHTF) as a weapon ONLY is a HUGE resource waste.

A good knife means a working tool and a weapon.

Also accept there are more usable weapons and tools out there, like an axe for example, in terms of multi –use. A knife plays it’s part in the bigger picture.

What I am trying to say is, do not get yourself to romanticized into a certain type of knife- when it come to stabbing and cutting (in fights) most knives will do the job, with the possible exception of a really cheap one.

When it come to tools, then you should aim to choose the higher quality ones (and multi purpose if possible)

In one period of SHTF, most of the knife fights I saw were done with simple kitchen knives, and I assure you those knives did the job bloody good.

Point here is to have intention, and yes, to have guts for that. The type and style of knife is very much secondary to that…

Always you want to have common sense, and adaptability. For example if you found yourself in situation where a knife is your only weapon maybe it makes sense to make spear out of it, to have some „distance and strength“. You can’t just assume there is only ‘one way’.

There are numbers and data from years of the research about bleeding and death from knife wounds and blood loss, and it worth your time to read it, to know what is about and what you can expect.

On the other hand there are real life experiences and exceptions for everything, and you need to acknowledge that too.

You could see maybe in movies that if you silently move up on a guy from the rear, put your hand over his mouth and stab him with the knife in his back region or kidneys, he is gonna go down silently in two seconds.

Good luck with that, stabbing someone is actually a very „noisy“ job, and there are variables like; Did you hit correct place? Did you stab or slice? How long and sharp your knife is? etc etc.

On top of all this you must understand you will need do add lot of force to whatever method you use, definitely not like in the movies, people will fight for their life – literally.

Depending of the situation, you could hit the correct place (carotid artery for example) but the wounded guy could still have enough time to strangulate you. I’ve seen it happen. Yes, he will die very fast from massive bleeding from carotid artery – but the point is he could still kill you before that happens.

So you have an option of moving to the guy silently in order to kill him, great, but think, are you going to use your fancy knife in order to cut his carotid artery?

Maybe it can make more sense (and present better odds) to use a big rock and instantly crush his skull, with one strong blow, rather than take the chance of missing an artery and be faced with an alerted enemy with a knife?

If you do not have any good training about how to correctly use a knife, it is simply not very easy to achieve fast, effective kills.

More unpleasant facts about a knife fight is if you want to kill someone with a knife, it is going to be some serious requirement in terms of „working“ with your knife.

For example a simple stab, or even multiple stabs to the abdomen region will eventually kill the man, but not fast enough- it is complete different story if you stab the man and then move your knife around- or dig, gouge and cut if you like. Messy job, but it works like that.

If you need to kill someone with a knife, and you get chance to stab him, you need to be prepared that it will likely take multiple stab wounds. One stab rarely works unless you are really know what you are doing.

The final sad truth is, that during the knife fight, when you get chance to stab your opponent, he is having the same chances to stab you, so there is a very good chance you will be hurt too.

Make sure you are not ‘over simplifying’ you options and training. Many preppers I hear carrying things with them to kill folks or defend themselves. You need to understand your full range of defense options, train with your tools and train with an understanding of the realities of these things in mind.

We discuss the realities of violent encounters a lot and much, much more during our flagship course in Croatia. If you are serious about your training there are still some spaces available.

Also, I am sure our readers have many great experiences and lessons on this subject to share. Please get involved in the discussion by leaving a comment below…

Etiquette In Unknown Areas (How To Avoid Starting A Riot) Guest Post – Adaptability: How to Develop the Right Mindset to Deal Faster...